What Makes The Perfect Christmas Card?

Christmas eCards Never Really Took Off, Did They?

You’d think with everything being digital in this modern world, Christmas eCards would have taken over and actual cards would be a thing of the past. Maybe there was a slight rise in eCards in the noughties, but they never took off and people have remained loyal to their physical counterparts. Perhaps it is the anticipation of opening a card in the mail, or even using cards to decorate the home during the festive season that’s kept this old tradition alive. There is often an internal debate you’ll have with yourself, what cards should I send? Should I design my own card? Who do I send each card to if I buy a set? Which ones look the best? Well, fear not, as I take a look at what makes the perfect Christmas Card.

Now, there are instances where a simple, minimalistic design just isn’t going to cut it, either for the sender, or the receiver, but a simple, Scandinavian design can often not only be aesthetically pleasing but also provide much-needed contrast to all the cluttered tat you have up in your home.

They say less is more, but just what can you get away with? There are many symbols, shapes, characters that represent Christmas, and all of these can be simplified to create not only minimalistic designs but unique ones too, something out of the ordinary which is going to be memorable. After all, you don’t want your card to be ‘just another Christmas card’, you want the receiver to remember it. While humour will often do the trick, it isn’t always suitable. And another card with snow, Santa, a photo of a tree, or an illustration of a manger… where is the fun in that? However, you can take one of these ideas, strip it back and make it so much more. Shall we take a Christmas Tree as an example? While you might cover yours with fake snow, they are notably green and triangular in shape. A green triangle might sound a bit lame to you, but execute it with precision and print it on some quality matte paper and you’ve got yourself a sleek and stylish Christmas card, that will have us designers purring. 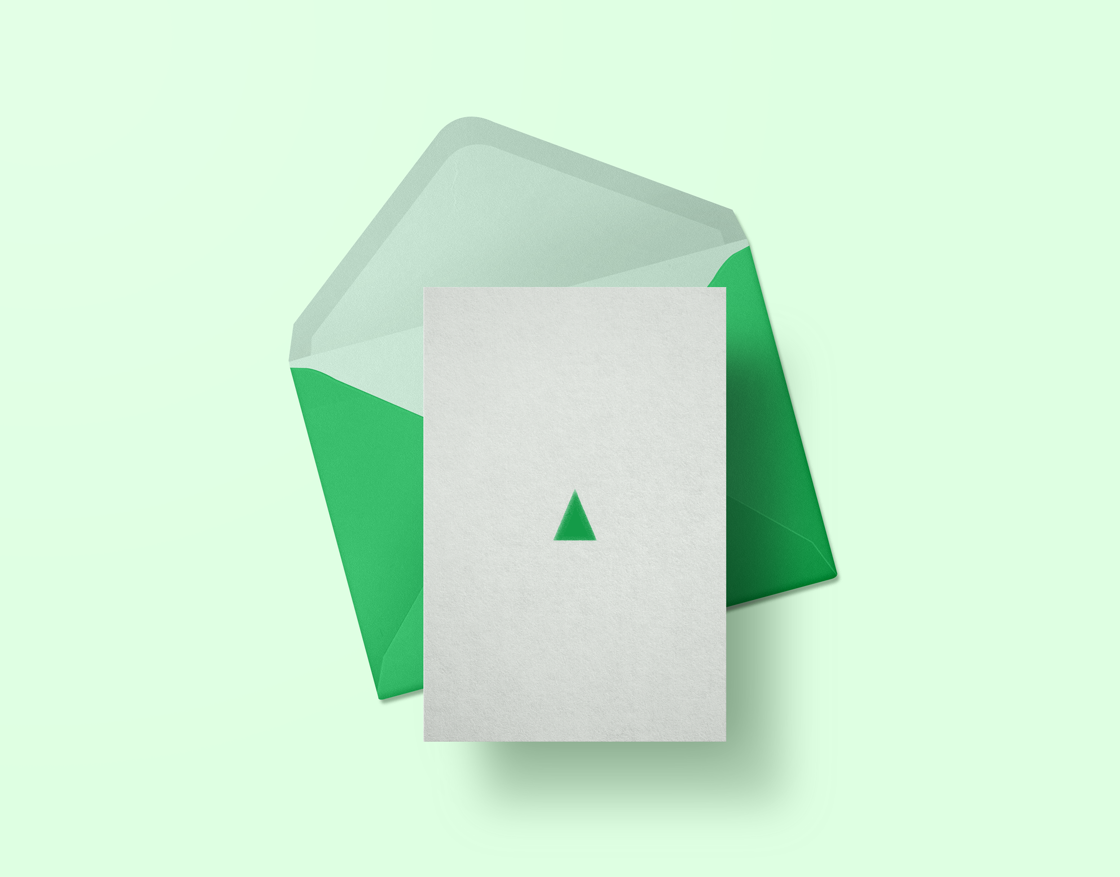 To be honest with you, the standard, traditional card you get through the door is just someone’s cheap way of saying Merry Christmas, they don’t actually care (Shocker! That old school friend you haven’t seen in years is, in fact, just being polite). From a designer’s point of view, a painting styled card or a photo can look nice and boost the Christmas spirit, but they aren’t always great on the eye. 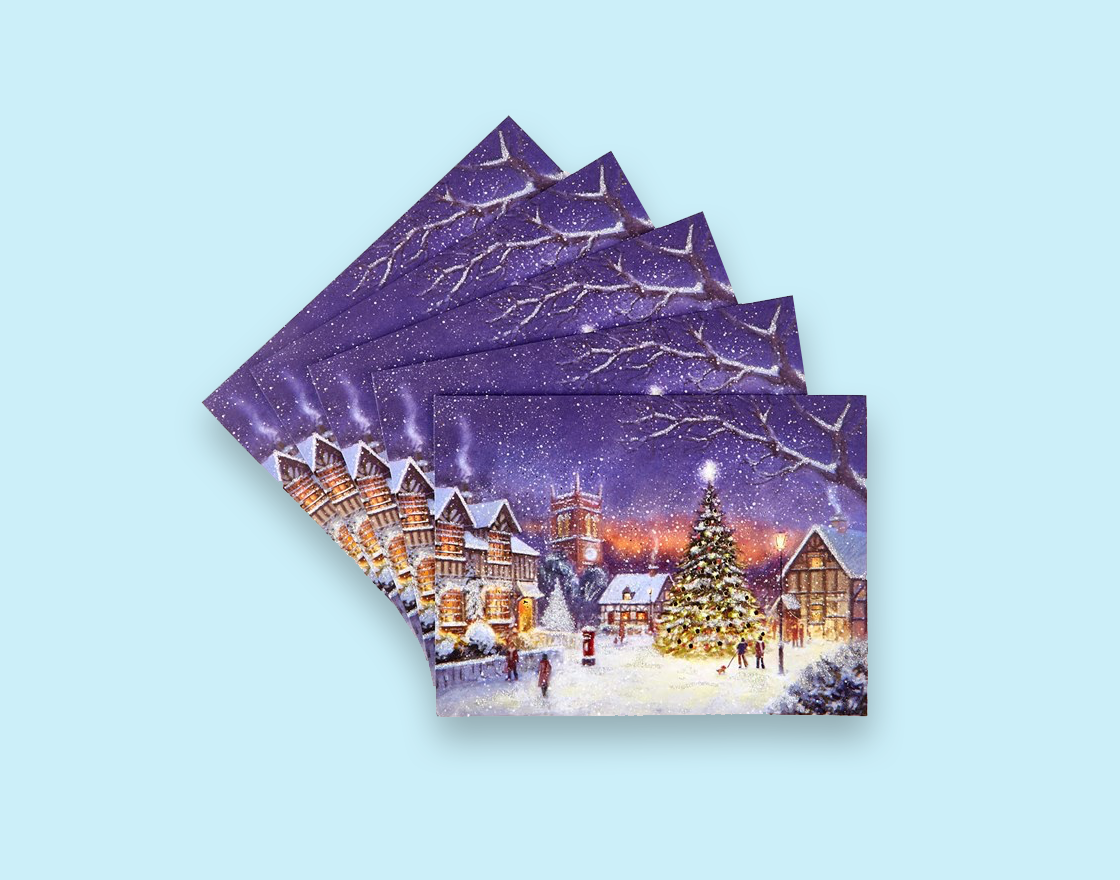 Take this card as an example, it might well ‘say’ Christmas, be nice and fit in with what you’d expect, but cards of this style are much the same. You aren’t going to remember cards like this. I don’t want to slate traditionally styled cards, but I’m not a big fan. Saying that, as a sender, I might not like it, but might know someone who appreciates traditional cards, in which case, this example would be perfect.

Thoughts on ornate and iconography

I’m not averse to ornate or icon-heavy Christmas cards, in fact, we designed and sent a few a couple of years ago to our clients. Like any form of designs, structure, layout and colour usage is key here. You can get away with almost any colour scheme at Christmas, but you’re not going to go wrong with red and gold or green and silver. 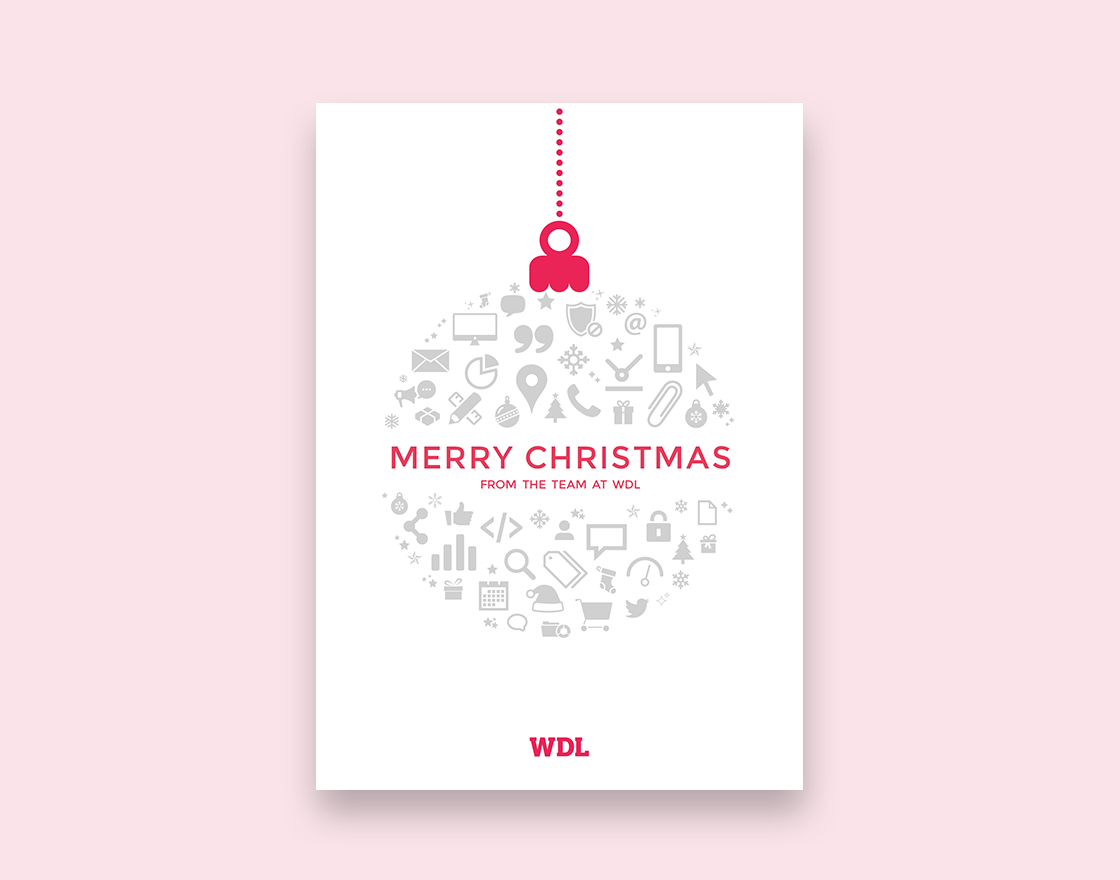 Here’s the card we sent out a few Christmases ago. Quite fitting really, a Christmas item composed of web design and marketing related icons.

The icons we used here were modern and vector based, other styles can often look too ornate, bordering on old-fashioned and dated. Take this one as an example: 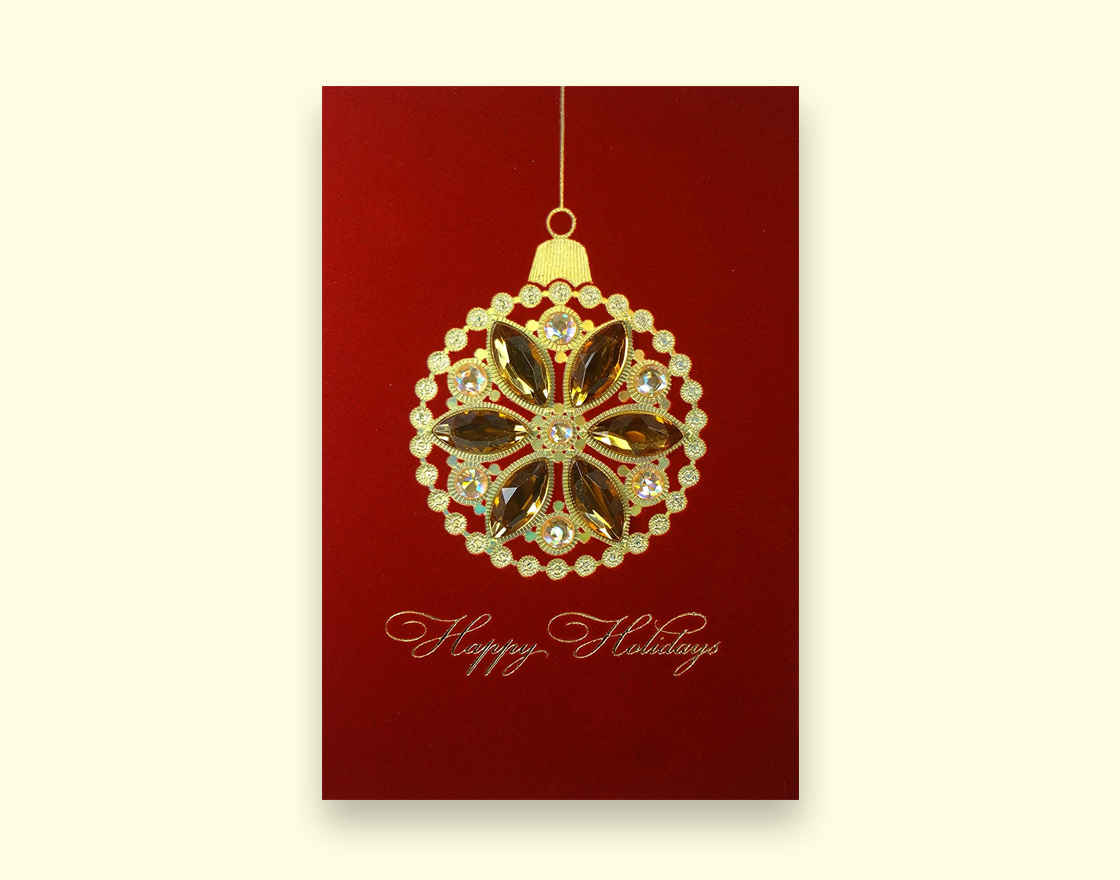 This might have been fine in the 1930s, but now, it just looks dated. Now somewhere in the middle that combines a traditional, ornate feel with modern vector design and typography is what you’re after.. The two styles may contrast, yet will work hand in hand to create a visual and memorable design, that may appear simplistic on first glance.

Think out of the box

Who decided a Christmas card had to be a card? Was it Santa? I bet it was Santa. Or Frosty, that scheming snowman. Cards can vary in size, but more often than not you’ll find a card is no larger than A5 when folded, and they do tend to be portrait. You know what? Throw the presents in the fire and break the ‘rules’ on your next Christmas card. Obviously, don’t go massive, but don’t be restricted to the standard sizes, create something different that is going to stand out. An A4 sized card isn’t exactly large, but it sure is different to the norm.

Who decided a Christmas card had to be rectangular or square? An unusually shaped card is more likely to grab someone’s attention and get them looking at it for longer, and at the end of the day, is exactly what you want. You see a few cards that are circular, but why not spice it up a bit?

Think out of the box. I’d go as far as thinking 3D, after all, why do cards have to be flat? Make something your receiver can keep. Again from a business point of view, this could reap rewards. Something your client can keep… something they can keep on their desk as a constant reminder of your business will keep you in their mind and next time they need something you specialise in.

Who said it has to be a card at all?

I touched on it briefly a moment ago, something the receiver can keep is much more powerful, as a marketing tool, and as a gift. Yeah, alright, the old couple down your road might have kept the cards you’ve sent them over the last 20 years in a drawer somewhere, but I doubt they ever look at them. Don’t just think outside the box, redefine that box. We’ve taken the initiative this year at WDL, and ignored the ‘rules’ of Christmas cards, instead we’ve gone with something that not only sends our Christmas greetings, but we’ve given our clients a nice keepsake, that relates to the work we’ve done for many of them. I won’t tell you too much, just in case they’re reading this, I’d hate to spoil the surprise.

Alright, I might not be focusing on design here, but humour in a Christmas card can provide a good laugh. 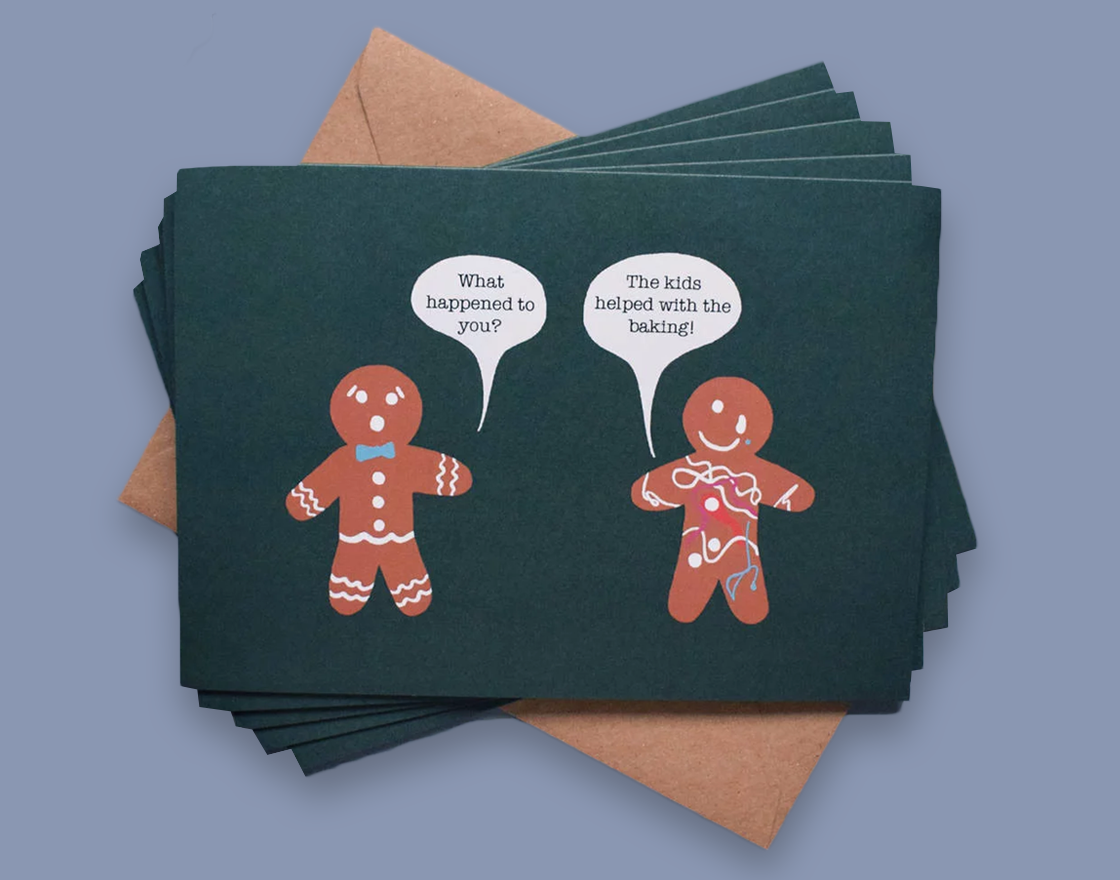 Gingerbread Man Christmas Card from Not On The High Street

Some might provide a chuckle, some might be pure cheese, but either way you’re going to evoke an emotive response from the recipient, and at the end of the day, you want your card to have an impact.

So, what makes the perfect Christmas card?

In truth, I haven’t answered that question, and I can’t actually give you a definitive answer, just advice, consider your recipient and their opinion of you. We could design the best possible Christmas card, but it might be completely off the mark for the sender and recipient, you want one that strikes a chord and relates to the relationship between you both.

However, from a design point of view I can give you a bit more advice, if you’re designing your own card, good on you, it will be unique and original. If you’re buying some, look for something different to the norm, not too tacky and personally I’d look for something modern and simple rather than traditional and busy (keep with the times!). A Christmas graphic will definitely help, not too cheesy and avoid clipart at all costs! A vector illustration, a drawing or photo could be just what you’re after, but keep it neat and keep it clean.

When picking or printing a card design it is also worth noting different paper weights and finishes. Glossy finishes, for instance, can work, but is it right for Christmas? Something weighted and with a nice texture or matte finish could be what you’re after, especially when you consider the first interaction someone has with it will be with their hands. Here at WDL, we took a (substantial) amount of time fussing over the paper style and finish for our Christmas ‘cards’, but as designers, that’s our job. We like nice things. If you’re interested to see just what we’ve produced for our clients this year, be sure to check our Instagram @wdltd in December and we’ll reveal all.

Oh, and one last thing, don’t just send a crummy eCard from one of those do it yourself websites with shocking stock photography. You’ll be off the Christmas card list for next year and I’ll probably block your number.

P.S. To all those Scrooges out there, I apologise for posting this is in November. 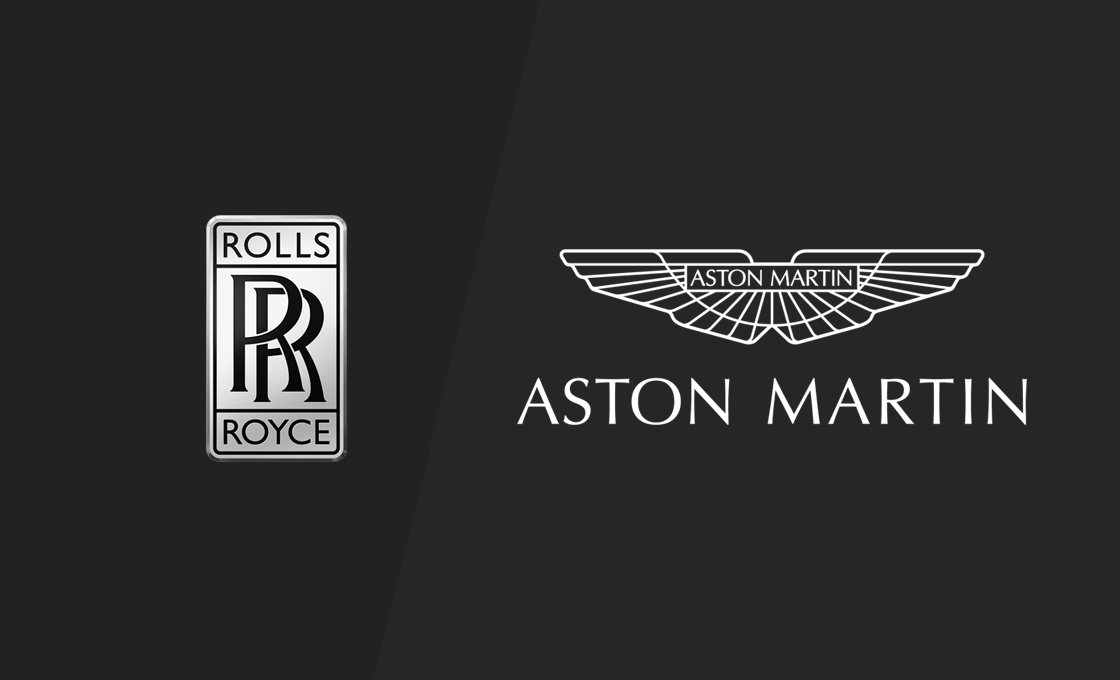 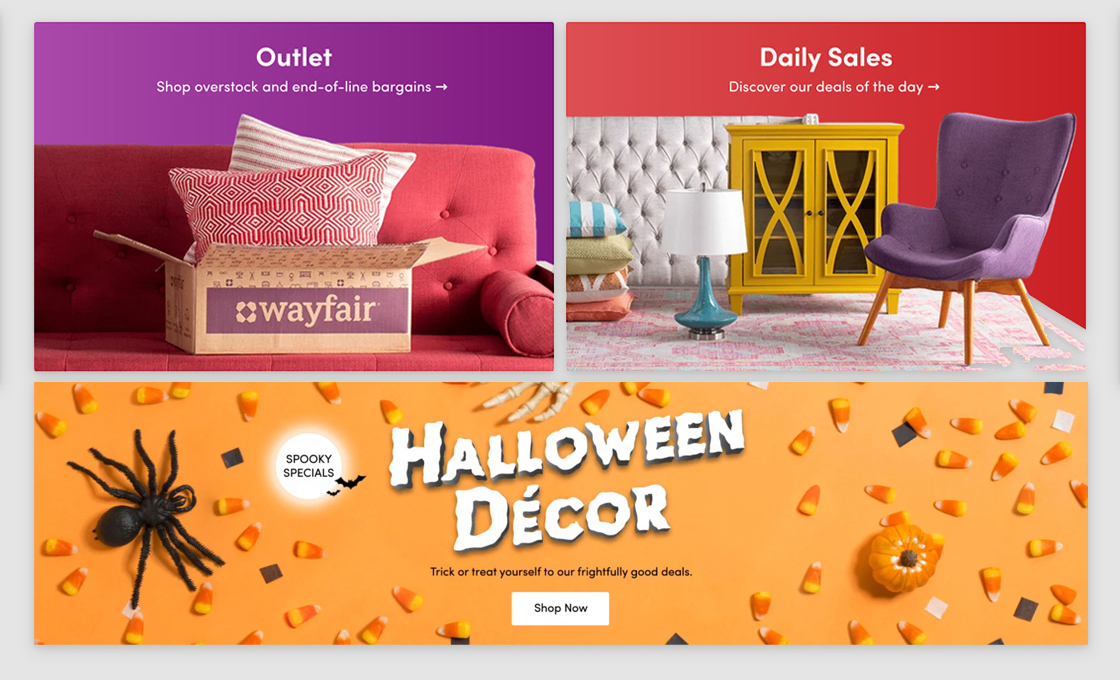 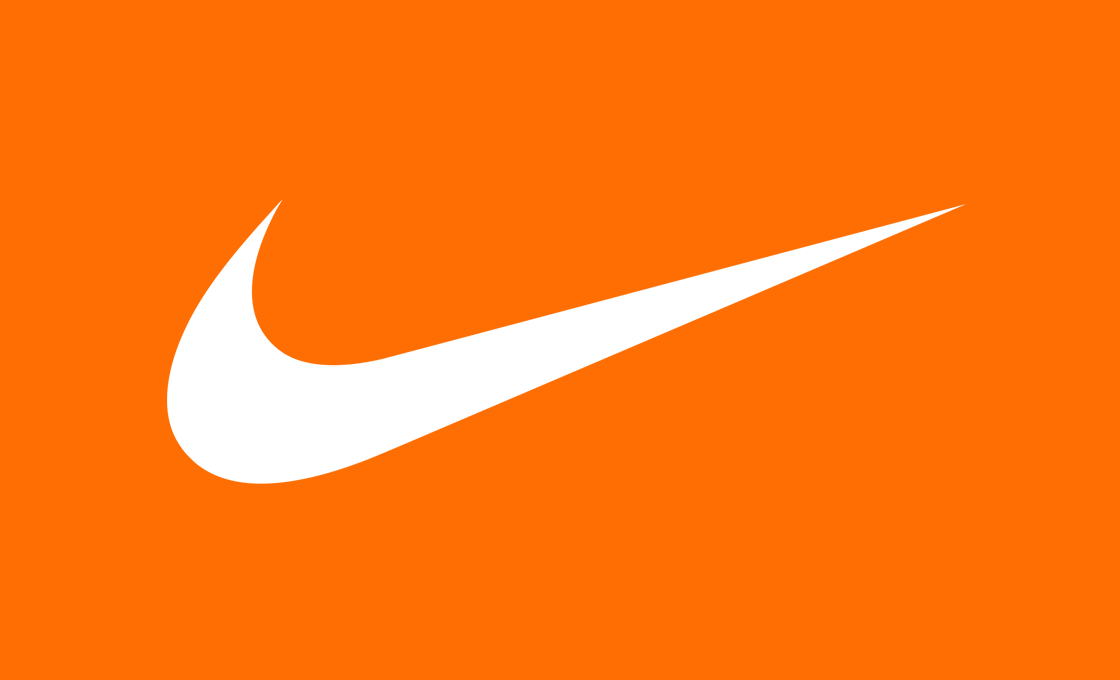